It is still the most sought after cryptocurrency in the world, even after its massive bull run and price appreciation. Everyone wants to know if the secular bull run will continue and if its price will double in the next year. BTC price has hit around $64,000 around April of this year, and there are many who are afraid that BTC price has peaked out and there is a downtrend and bear run on the verge. In this article, we will take a detailed look at BTC price prediction which we learn from coinpricepredict and answer if Bitcoin can reach $100k in 2022.

The major financial institutes are still not on board with investing in cryptocurrencies. There are some who are worried about the high volatility of BTC price while others are minting money by trading in Bitcoin. Therefore, a huge amount of money will surely come in Bitcoin in the next year as per some economists, and this will pump up Bitcoin level to heights you can never imagine.

There is an increase in the global adoption of blockchain technology as well as for cryptocurrencies. This is ultimately going to increase the credibility of cryptocurrencies, and the maximum reliability will fall on Bitcoin. Therefore, there is going to be not just appreciation but a super surge in prices.

Bottom Line: There is a huge scope of price appreciation based on fundamental factors that are likely to be in action next year.

BTC was trading at around $29,000 on 1st January of 2021. By April-end, the price peak out at around $64,000. This is an appreciation of more than 100% in just 4 months. It is currently trading around $50,000 currently. So what we are talking about here is whether BTC price will double from the current level in the next one year.

If you check the volatility in the price movement of BTC, 100% is almost a regular thing in Bitcoin for a span of six months. After hitting $64,000 in April, the price corrected and it came down to around $30,000 again and now it is $50,000. Therefore, you can see that 50%-100% return in six months to one year is extremely possible.

Bottom Line: Exports believe that BTC will hit a new life-time high by this year-end. Even if it corrects from new highs, the animal spirit in the traders will definitely double it and make it touch $100k in 2022 and even go beyond that comfortably. 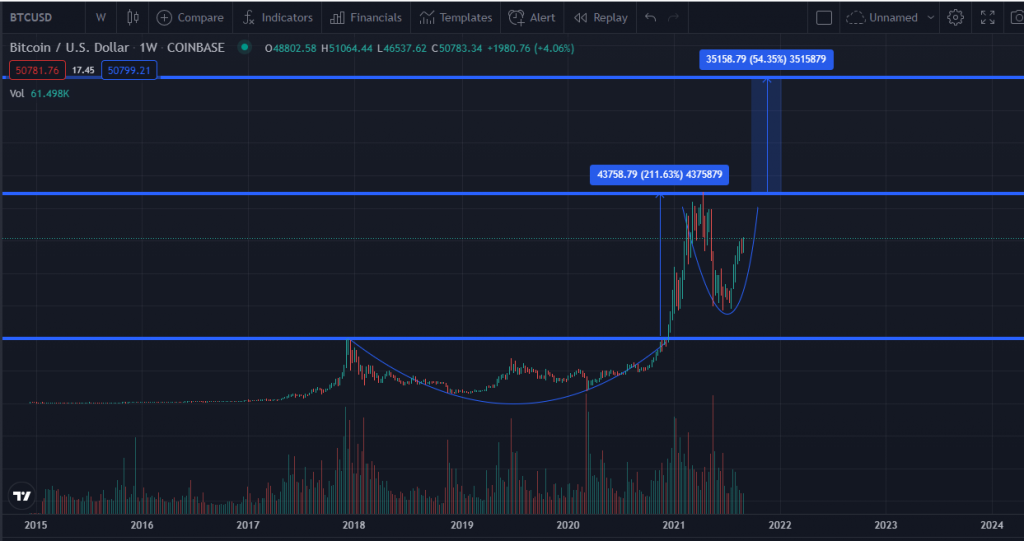 In chart analysis, there is a simple rule that everyone follows which is history repeats itself. Therefore, it is very likely that whatever happened in the past, the same thing is likely to happen again. However, the magnitude and the duration may not be the same.

Currently, there is a rounding bottom formation going on, but it is a smaller rounding bottom in comparison to the previous one. Therefore, the appreciation will be less. Hence, after breaking out of its previous lifetime high, we are expecting a 50% appreciation from that lifetime high. This means it is likely to touch $100k and that too in 2022 as the price movement is high in the formation.

As per the current trend, there is still no sign of a bear run in the Bitcoin chart. The long-term trend is up, and it is intact, and hence, if the current trend continues, it is highly likely that Bitcoin can hit 100K mark in 2022. However, this is not a recommendation but a prediction, and hence, you should take your own decision while trading and investing in Bitcoin.